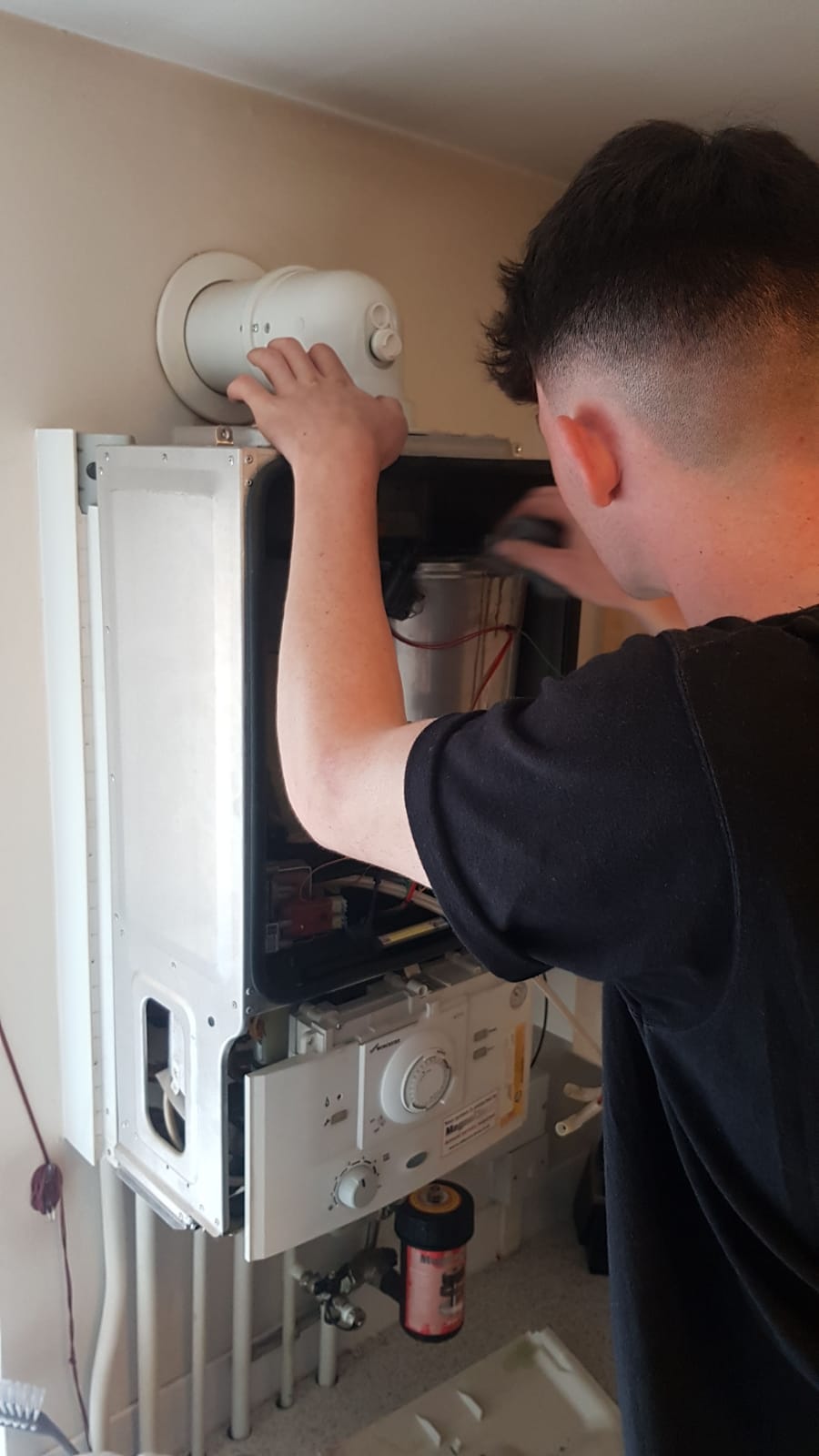 Nearly all boiler systems have a boiler flue, whether they are combi, regular or system boilers. They are essential to protecting the health of people living at the property. There are numerous regulations that affect boiler flues, including their size and where they can be placed.

The end of the boiler flue is visible at the exit point from the home. On cold days the by-product fumes are easily visible.

Where is my boiler flue?

The exit point of a boiler flue depends on the building type and shape. The majority of boiler flues pass horizontally through the external wall next to the boiler. This is because it is often easier and cheaper than passing the flue vertically, which requires extra parts and work to install.

Housing regulations in the UK require boiler flues to be placed at certain distances away from openable doors, windows and vents to prevent fumes re-entering the home. Boiler flues should also be positioned away from drains, gutters and balconies because the fumes can be hot enough to melt plastic. Flues should also be placed at least 2.1m above the ground if placed on an external wall next to a frequently used path.

Other boiler regulations include the boiler being placed 200mm below roof overhangs, 2000mm below a Velux window and 300mm above a flat roof (for a vertical flue). Refer to the specific guidelines for your boiler model in your boiler manual.

What factors affect the cost of a boiler flue?

The cost of a boiler flue depends on its shape and length. Typically a new appliance will require a new flue so you are likely to incur costs for this to be replaced. Whilst your existing flue may look and operate correctly, it may not be suitable for use with the new appliance.

Likewise, if you are forced to move your flue because of a house extension you will also incur a cost, especially if the flue has to become vertical and leave through the roof. This is because the vertical flues are more complicated to install. For example, the roof of a home is usually not easily accessible, which means a boiler engineer will need to acquire scaffolding to reach the roof. Roof tiles will often also have to be moved.

What happens if a boiler flue is blocked?

If your boiler flue is blocked, you should immediately turn off your boiler system and call a Gas Safe Registered (GSR) engineer to inspect your boiler. Do not ever attempt to unblock the flue yourself. If possible, open windows and doors to ventilate the home before leaving the premises. If you suspect that the flue has been blocked for some time seek medical assistance in case you have suffered carbon monoxide poisoning.

Boiler flues can become blocked by leaves, insects and various other debris. These blockages are more common in rural areas surrounded by trees, although boiler flues in urban areas can also become blocked, especially by birds’ nests.

Can I extend my boiler flue?

If you are carrying out an extension on your home, or suspect that your boiler flue is not placed sufficiently away from a window, vent or door, you may need to extend the flue. You should look at your boiler manual to find the recommended specifications for your boiler flue, at which point you can speak to a qualified engineer to install the correct extension.

Does a boiler flue have to be straight?

Best practice is to install boiler flues that are as short and straight as possible to maximise efficiency. Nevertheless, some boiler models allow for longer boiler flues which sometimes require bends. The number of bends allowed depends on the length of flue allowed.

What is a Combi Boiler?

Only use a GAS SAFE REGISTERED ENGINEER to FIT, FIX and SERVICE your gas appliances. Click here for more info.

NEATER HEAT LTD, registered address 6 Beechnut Ind Estate, Beechnut Road, Aldershot, Hampshire, GU12 4JA, company number 10124412 is an Introducer Appointed Representative of TradeHelp. Our firm reference number is 912648. TradeHelp is a trading style of Tradehelp Ltd, Marchwiel Centre, Bryn Lane, Wrexham Ind Est, LL13 9UT, registered in England (03712438), authorised and regulated by the Financial Conduct Authority (firm reference number 697812). TradeHelp are a credit broker, not a lender, and offer loans from a small panel of carefully selected lenders. TradeHelp do not offer financial advice and do not charge you for credit broking services. All loans are subject to status.